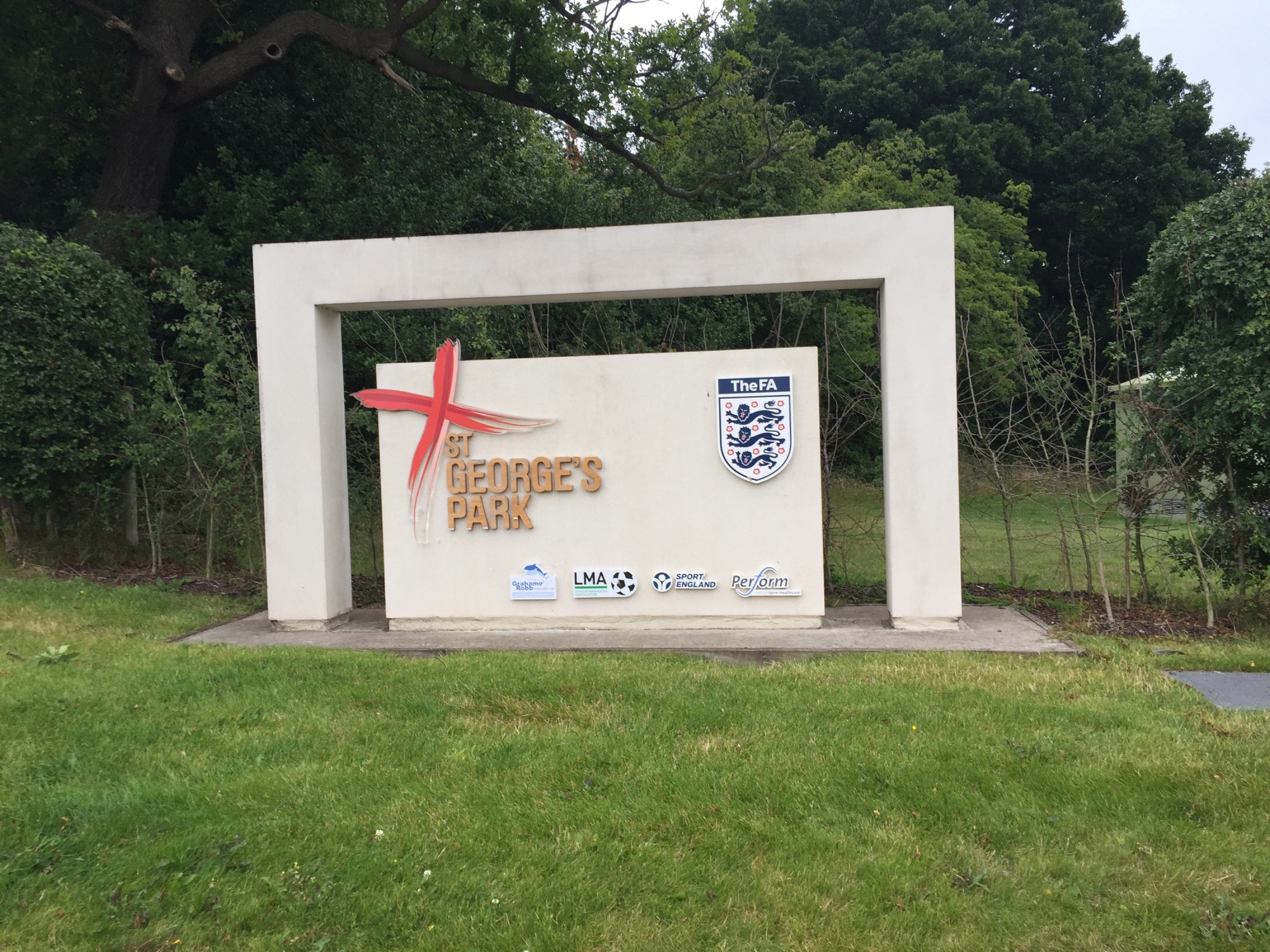 Matt was sent to Burton to visit St George’s treatment centre for his ankle. My days off worked well that I could drive down Tuesday night after work at 4.30pm, then spend a day together Wednesday, drive back straight to work Thursday morning at 9am. He stayed in the St George’s Hilton which is next to the sports centre. 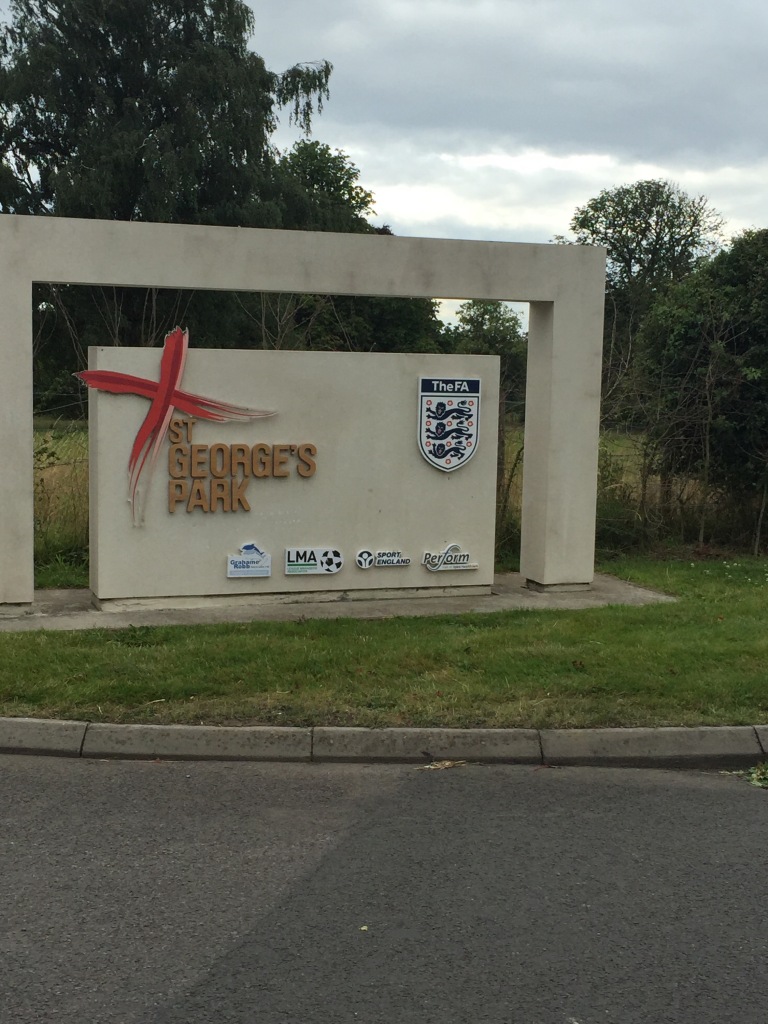 I run out of phone battery which was my sat nav, I got there a bit later than expected. We decided to just order room service for dinner. I went for the chicken curry with rice. This was really nice. To be honest, I was starving so anything would have been good. It comes with a slice of narn bread too. 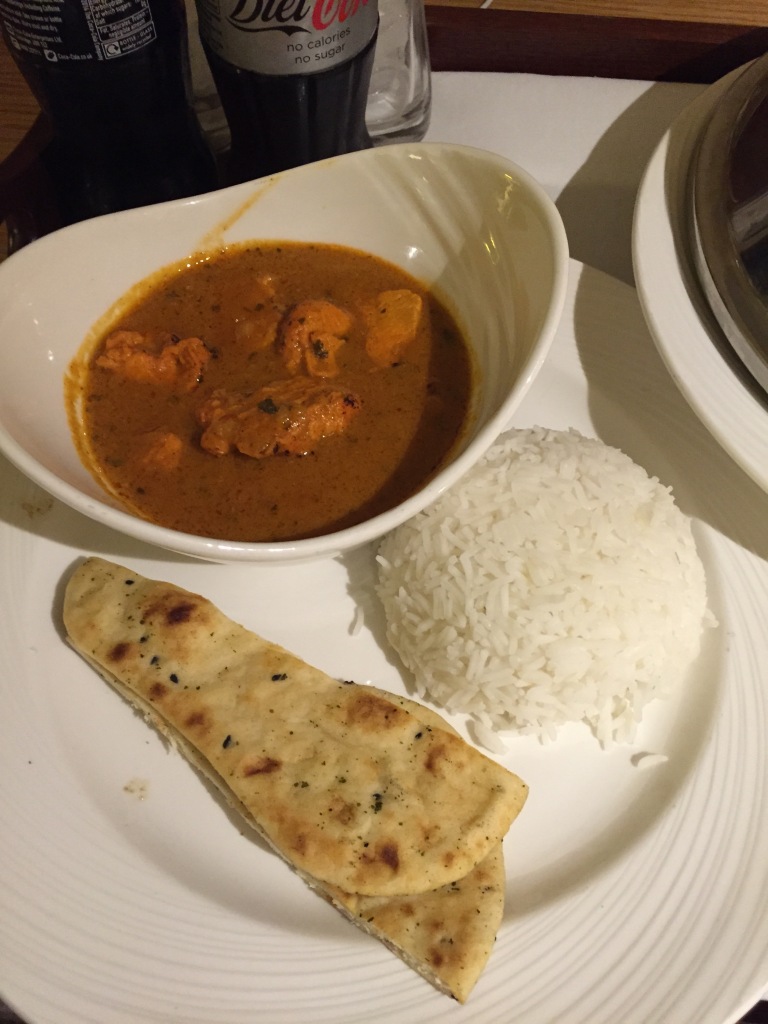 Matt has the classic burger and chips. This is served with ketchup and Mayo. This looked really good. I sneaked some of chips, to try and they were good. Can’t go too wrong with chips though. 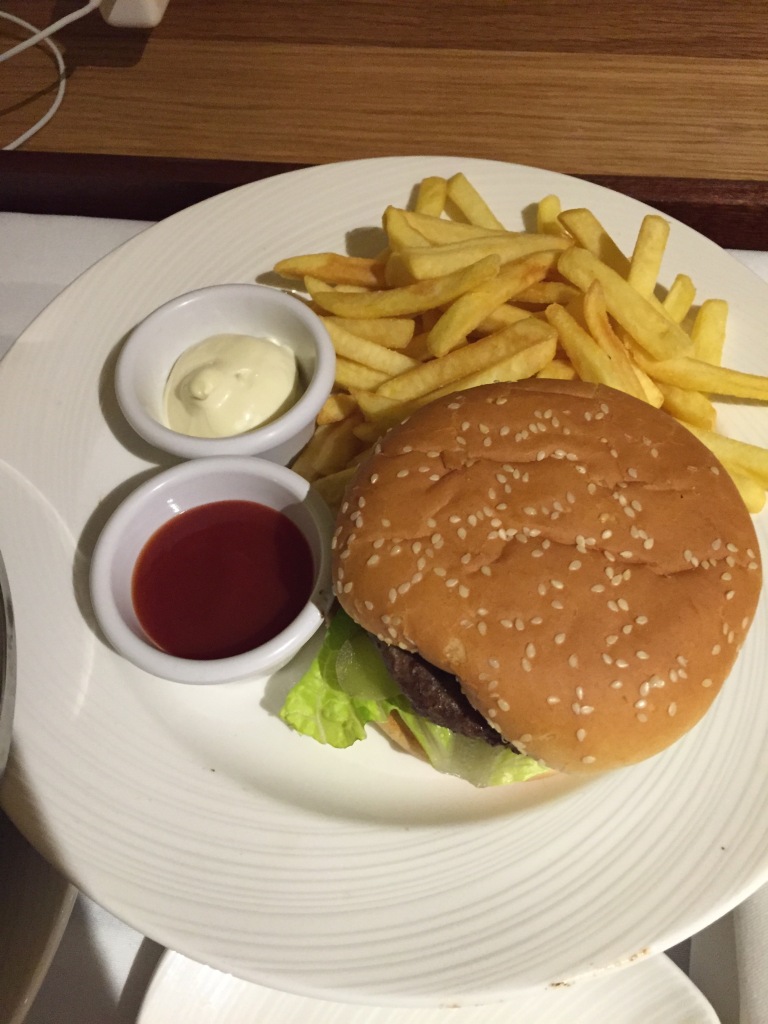 We ordered our breakfast to the room. This was included in the price of the hotel room, but as we had it to the room we had to pay £6 extra. You get an order card to fill out and then hang on your door handle. The only thing with this one, it doesn’t have sections to say what each person wanted. You just have to tick boxes and they bring enough for two people. Matt doesn’t really eat a big English breakfast, he only really has sausages and toast, so there was a lot wasted as I went all out and had everything basically.

We got some yogurts, which I thought I could put in the fridge and keep for a snack later on that day. We also got some fresh fruit which was really nice. I put this in the fridge too for later on. 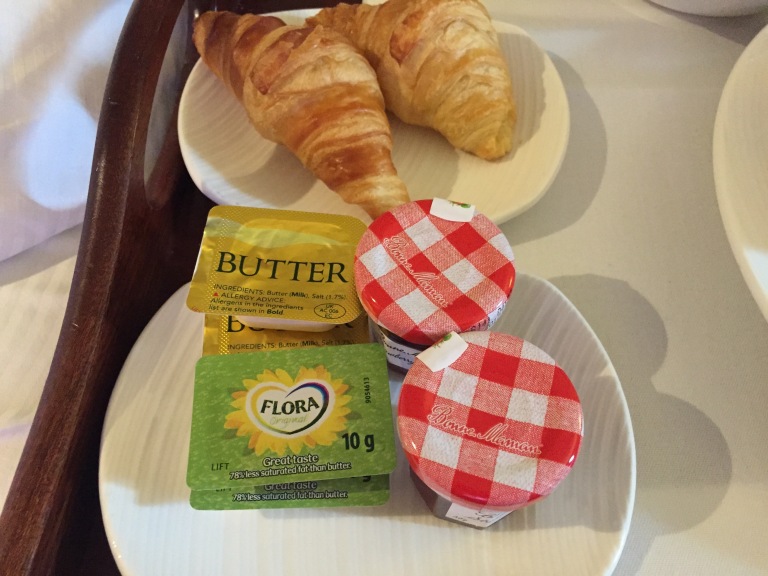 Matt went off to football around 9 so I was left to own adventures. I decided to have a relax, wrote some blog posts then head to the pool. The pool was amazing. It was quite small but it was really nice. They have a jacuzzi spa, a foot spa, sauna, steam room and an ice room shower type thing. I’m not really into sports so didn’t really appreciate all of the facilities, but I did try them all! The swimming pool was fairly quiet. I got down there about 11am and there was only 5 other people there which was good. They have loads of chairs and sun loungers in there too.

Before we went out for dinner, we headed to reception to see if Matt could get s late checkout for the next day. The lady at the reception (Janet) was so rude, she obviously couldn’t be bothered to help us. Her reply was no we are really busy. Matt had to try really hard to get any information out of her, considering the price of the hotel, would be nice to have helpful staff! The staff that bought our dinner to the room were lovely though.
We decided to head into Derby town for dinner and see what there was. The town seemed really quiet, we found the shopping centre and headed there. They had loads of options to pick from for dinner. We obviously went to TGI. Probably our favourite restaurant to go to as a couple.

The menu was different to last time we went, they have taken out the mushroom bruschetta, which was my favourite! Sad times for me! They have all different things like a bucket of bones, which has chicken wings and ribs in a spicy chilli sauce, it’s a sharing starter and says it serves 2-3. The menu looked really interesting. I went for nachos to start. I love nachos as you can tell from previous posts. These were good. But… They have a pastry type tortilla crisp. It’s strange, they have normal tortilla crisps in the top, then underneath it’s a pastry type crisp. I ate them all anyway, I’ve never had that before. I think I would rather have normal tortilla crisps all the way through. These were £4.99 We also shared some garlic bread too which was £2.99.

For my main I went safe and had a burger. It was huge! It comes with all the salad and a side of chips. I struggled here with this, considering I didn’t have a lunch I was surprised I couldn’t finish this. This was £10.49.

Matt went for his favourite Jack Daniels chicken strips for a starter. This was part of their uptown menu so this and his main was only £15.99. Great discount, but the menu is limited, there is only a few dishes on here to pick from, and it’s never the ones I want! It’s always the way. 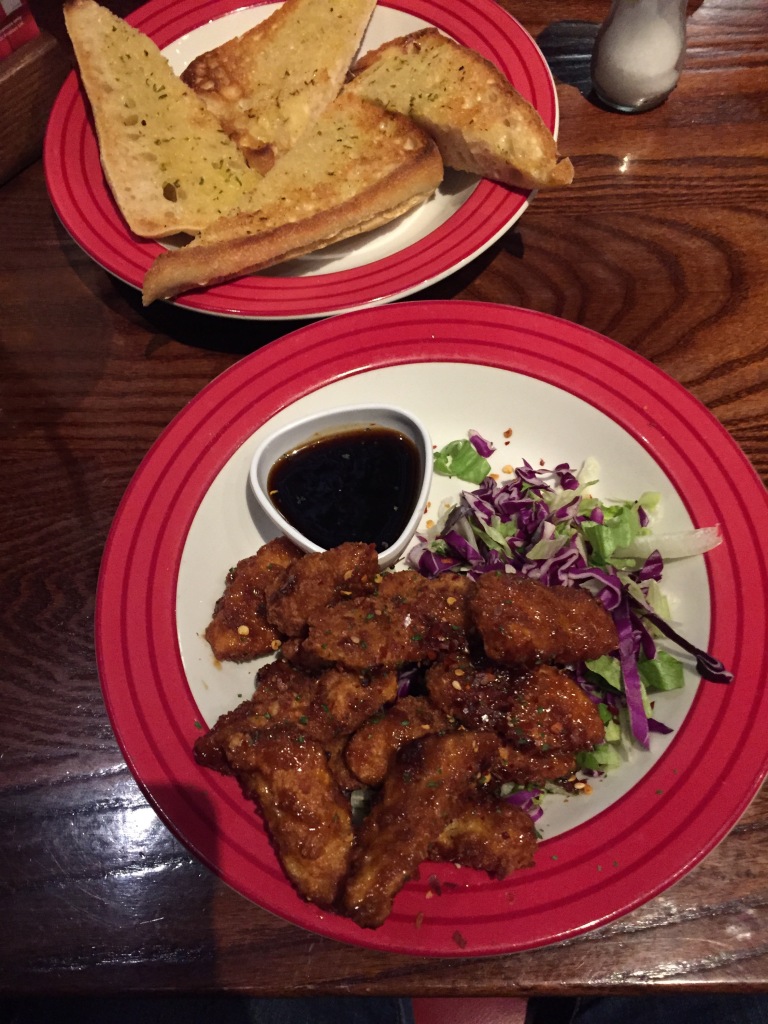 For his main he went for Jack Daniels chicken and chips. He either has this or the ribs, those are his two options from TGI.

We were so full up there was no need for any pudding. In total it came to £39.84.
We headed back to the hotel, it was still early so we decided to watch a film. Matt had entourage on his laptop so we went for that. We loved the TV program, so was quite excited to watch this. He really enjoyed it, and it was what he expected and loved it. I didn’t like it, it was like an extra long, pulled out TV show, it felt a bit boring and too predictable. So I just went to sleep half way through!

We were up early her next morning as I had to leave about 9 to get to work for 12. I didn’t want to be caught in traffic and be late. Matt went off to football and then drove straight home after around 3.30pm.
I had a lovely mini break. It was good to get away. Work had been really stressful so felt good to get away, even if it was only for a day.

Would I go back to the hotel? This is a hard question, the positives are:

See it’s hard. I think I would go back. We have written to Hilton about the staffs attitude. I work in retail so I know how important customer service and satisfaction is. I wouldn’t dream of talking like that to my customers! 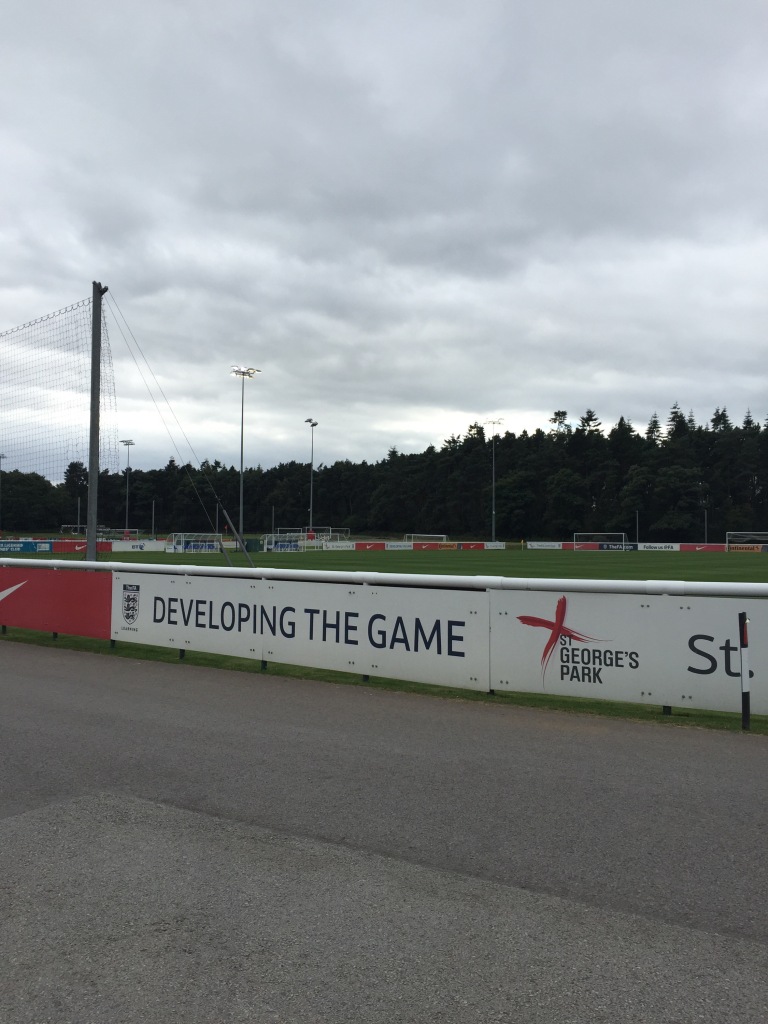