I am a member of the applause store company which is just a company that provide free audience tickets. I was lucky to get a League of their own tickets for Friday. We planned how to get there what to wear and it was sorted.

Friday came. We live in Woking so jumped on the m25. There was traffic pretty much all of the stretch. Dad kept jumping off and junctions and coming back on which allowed us to skip a bit of traffic. We finally got there but just ten minutes too late so missed out. You can get priority tickets which is what we had which means you are guaranteed seats but you have to be there by 5.45 otherwise you go in the standing queue. We got there just before 6 so we missed out on guaranteed seats. We decided to make the most of it and go find somewhere nice to eat.

We drove past a cute restaurant called The Fishery. It’s on the main stretch of road but across the road is a lake and you can sit outside and look over the lake. If you are lucky to get a seat outside you can sit and watch the sunset over the lake.

We got there just after 6pm so wasn’t too busy, but all of the tables outside were occupied and the tables by the windows were all reserved. So get in there early if you want a view of the lake! 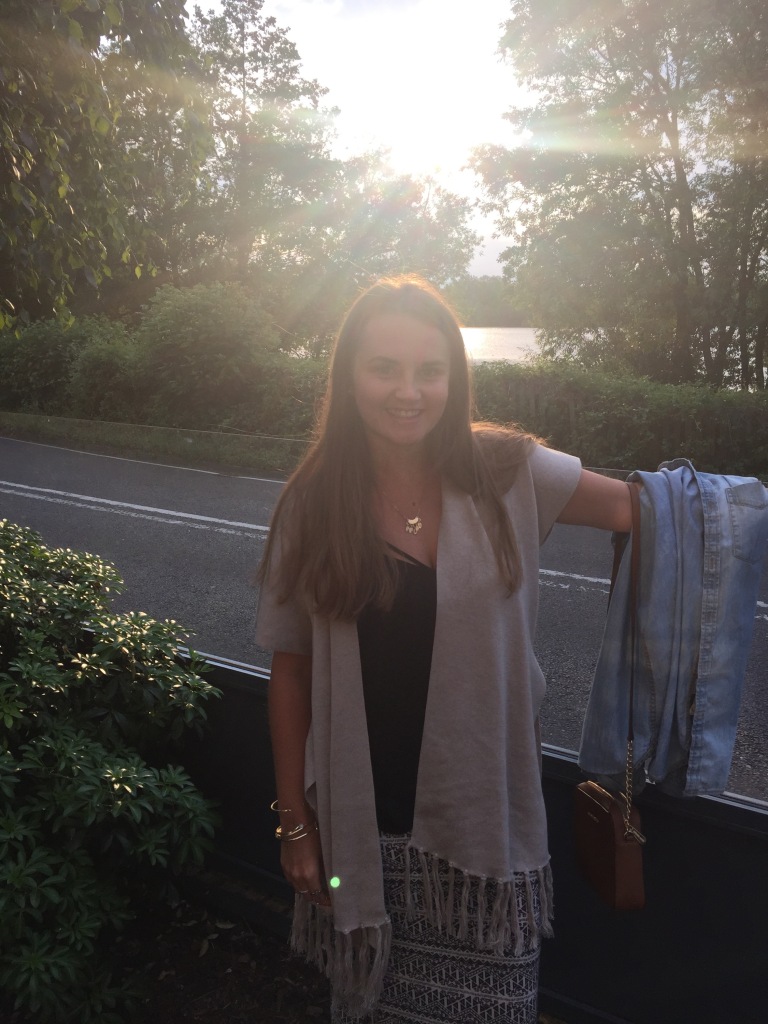 We ordered our drinks first, me and dad had a Pepsi max, mum just a tap water. They seem to bring out a glass of bottled tap water to every table anyway.

The tables are nicely set out with copper salt and pepper grinders, blue tumblers for water and huge wine glasses. They lit all the tea lights on the table too.

We decided on getting bread for the table to start. This came with a pesto dip and an alioli dip which is mine and my mums favourite. The bread was a mixtures of traditional white breads and a sweet bread with currents in. This doesn’t come with butter though. This was £2.95.

For my main I was stuck between the steak and burger. I hadn’t had a lunch break so I thought the burger would be a good treat! It was £10.95. It comes with chips, coleslaw, a salsa dip and salad in the burger. The bun is a brioche bread so it was very sweet. It was too sweet for me, but obviously I still ate it all! The burger itself was really good. The presentation was really good, the burger bun gets stamped with an F which i thought was cool. The chips come in a small bucket type pot which I just pour straight onto my plate. The coleslaw was really good, it was obviously all made there fresh as the cabbage still had crunch to it.  We asked for some mayonnaise which came out in cute little glass jars.

Mum wanted to have something different so went for something on the specials board. There is an actual speacials board when you walk in next to a fire place. The waitress tells you all the specials when she comes to the table too. She went for the salmon filet which was £18.30. This came with a hollandaise sauce and spinach. He waitress recommended that mum ordered some potatoes or another side with it, so she ordered a side salad. Once again the presentation was really good for this dish. Mum ate all of this and said it was really good.

Since it was a Friday dad went for a traditional fish and chips. This was a cod fillet served with chips and mushy peas. This cost £12.95. The portion of fish was fairly small though. He gave mum the side of tartare sauce.

As we didn’t get a starter it was only fair we got pudding! Compared to the food menu, the pudding menu didn’t have many options. I still managed to find something to ge though. Me and dad went for the lemon tart, mine came with raspberry sorbet, dad didn’t want this so asked for vanilla ice cream. Both of them game with a dollop of cream too. These were really nice. Dad didn’t like the drizzle of raspberry sauce the tart was served on but I thought it gave it a good kick of flavour. This was £4.95.

Mum wasn’t sure what to get. The waitress told us there ice creams they stocked and that she recommended the amaretto ice cream. Mum went with her recommendation and got two scoops. This was £3.90. Mum wasn’t too sure what flavour this was, I explained it tasted a bit like marzipan so she knew it would be an almond flavour. She really liked it and said she would get it again!

As a random treat it was really nice. If it was nearer to where we lived I would go again. I might see if we can book a table outside and maybe eat and watch the sunset in the summer. At the end of the meal they bring the receipt and a business contact card for the manager of the restaurant which is really nice. 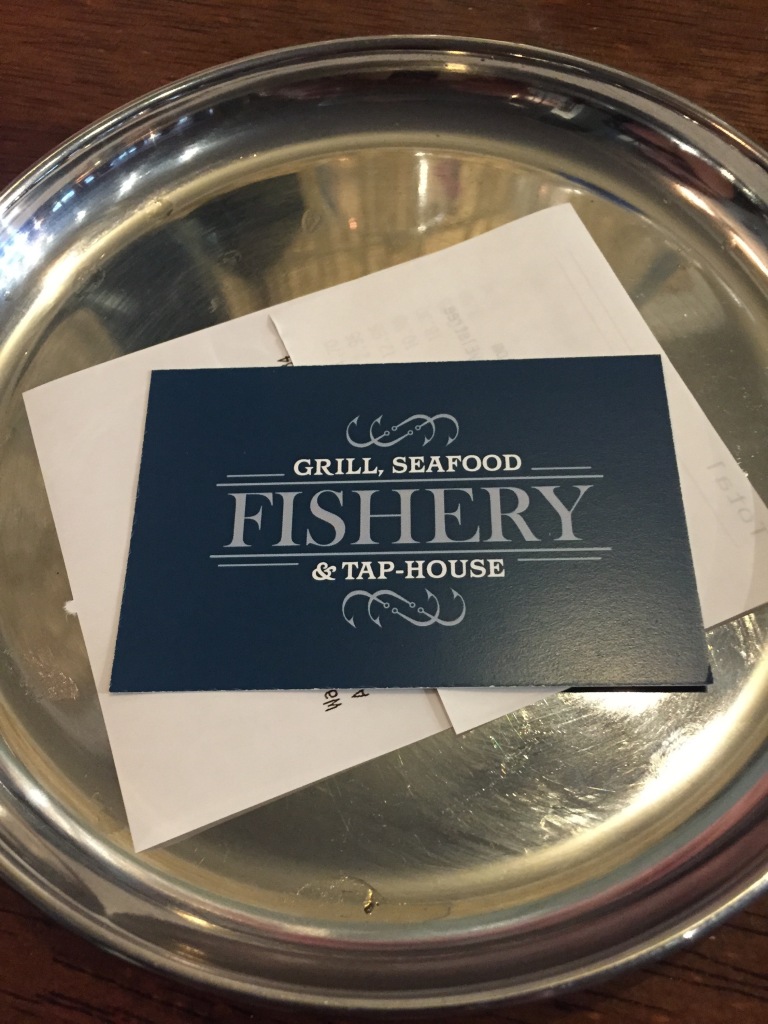 On the way home you drive past the Warner Brothers Studio which is where they filmed the Harry Potter films. You can now do a tour of the studio too. Dad decided to drive in (I haven’t watched any of the Harry Potters) and see if we can go look in he gift shop. Amanda LOVES Harry Potter so we thought we could get her something for her upcoming birthday. We got stopped at the gates. You are not allowed in unless you have a ticket! We only wanted to go spend money in the shop! Anyway I took some photos of the gate and we were on our way back home. Sorry Amanda, no Harry Potter stuff for your birthday. 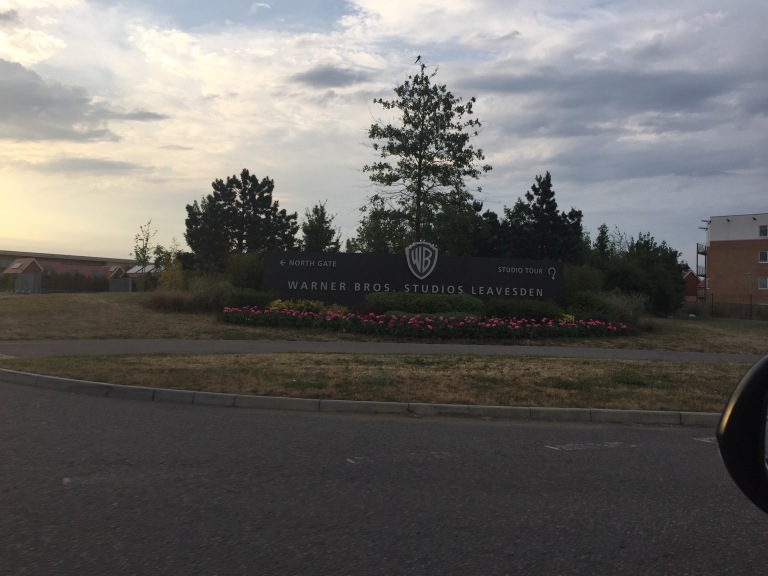 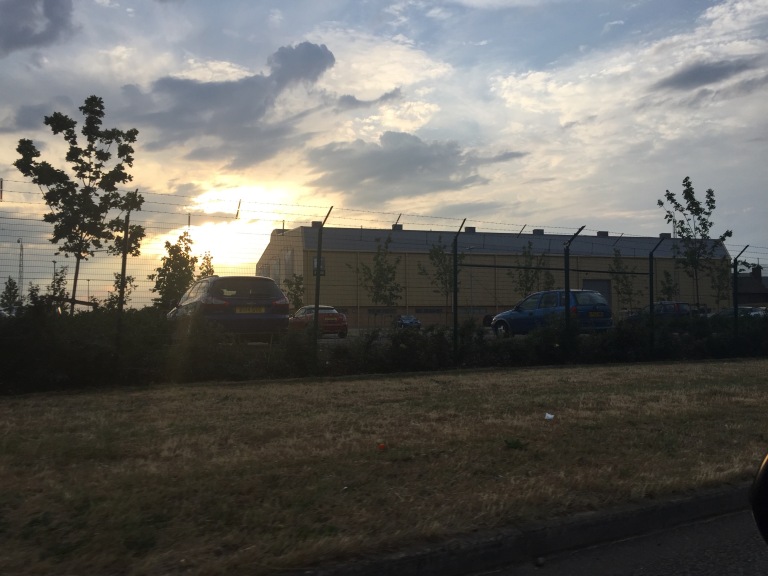